Little girl’s Book Week Costume Has the Internet in Tears 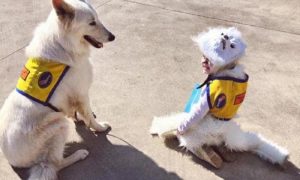 My daughter wanted to go as a princess to Book Week.

She is four so naturally I could see why that was the best option in her little head to dress up like a princess for the day, but we challenged her to think about it and empowered her to think beyond the female stereotypes.

Instead she picked a book called Next Door’s Dog Has a Job, by Gina Dawson.

It was given to her by her aunty who has an assistance dog.

Before we left the house my daughter cried her eyes out because at the last minute she decided she wanted to be a princess because all the other girls would be pretty today and not her.

Without a second thought my sister jumped in the car and drove an hour to meet us at the day care with her special dog Thaddeus, which I am so grateful for as I know some days just leaving the house is hard.

My sister put Thaddeus’ service vest on and took both of them into the classroom and read all the children the book...

Exciting times!  Two new titles are to be released in January 2019, again with New Holland Publishers.

Next Door's Dog Goes to School is the second in the Next Door's Dog series, written to explain the many jobs that Roxie, a different type of Assistance Dog, performs for her young human companion, Grace.   With Roxie at her side, Grace can do just about anything that other children do, including going to school.   Beautifully illustrated by Vivienne da Silva.

So That's How I Began! The Facts About Where Babies Come From is the second in the So That's series, and illustrations by Alex Mankiewicz are sensitive whilst being quirky, interesting and humorous.   Written in the same comfortable and easy to read style as So That's What's Happening! this new release covers modern families, body parts, how babies are conceived, grow and are born, all in an age appropriate way that aims to promote discussion with curious children of any age.

Thanks to those who have already pre-ordered either title - I'll be in touch as soon as the books are released.

Anyone wishing to pre-order, feel free to contact me directly, or order via the numerous book stores who will be stocking these titles.

There are two more titles at manuscript stage so I'm looking forward to further releases later next year.

Thanks as always for everyone's interest in my books and for your support.

On June 26, So That's What's Happening! was released by Amazon USA as well as several other international on-line sellers.   First indications are that it has been well received and is selling steadily.

I have also been notified that a number of lending libraries in the USA have purchased copies.

We are pleased to see So That's What's Happening! selling well overseas, and have received interest in the next title in the series, to be released later this year.

Next Door’s Dog Has a Job hits number one

During July, Next Door's Dog Has a Job has constantly hit the number one spot on the Booktopia Bestseller list in its category.   We are thrilled with this result, as well as with the reviews and feedback we are receiving from families, kindergartens, schools and the disability sector.   It seems that the children love learning about Bailey, and the jobs he does to look after Kate.

Additionally,  the book is in the top two hundred in the general illustrated children's category, which consists of some 30,000 plus titles.   Thank you to all who have purchased.

Another book in the series is due to be released (New Holland Publishers) late this year.

Book Release: Next Door’s Dog Has A Job

Today Next Door’s Dog Has A Job was released!   It’s my second book with New Holland Publishers, and a big thank you to their team for such a wonderful result.  Many thanks of course to illustrator Vivienne da Silva for her gorgeous and insightful illustrations.   This is her first picture book and the result is stunning.

Interest from schools, kindergartens, disability groups and of course dog lovers has been high and thank you to all who have enquired and ordered the book.   Dogs and their roles in modern society is a topic I feel strongly about, in case that isn’t obvious!

Please take a look at the BOOK section of this site if you would like more information.

On January 18th, 2018 my first book with New Holland Publishers was released!   I couldn’t wait to see it, and was so thrilled with the quality and presentation by the publisher.

I feel extremely fortunate that internationally acclaimed Alex Mankiewicz was keen to illustrate So That’s What’s Happening! and I believe her illustrations are nothing short of brilliant for the intended age group and this sometimes tricky topic.

I’ve been pleased to see Booktopia featuring the book regularly on the msn website.

The interest by schools in using the book as an adjunct to the health curriculum has been high, and sales in Australia so far have ranged from schools in major cities to tiny remote schools with a handful of students.  We even received an order for a dozen copies from the furthest location of Australian territory (with the exception of the AAT)  – Christmas Island!

Thanks everyone for all the interest, much appreciated!

A “companion” book, also with New Holland Publishers and to be illustrated by Alex Mankiewicz, is scheduled for release later this year.

Please take a look at the BOOK section of this site if you would like more information about So That’s What’s Happening!